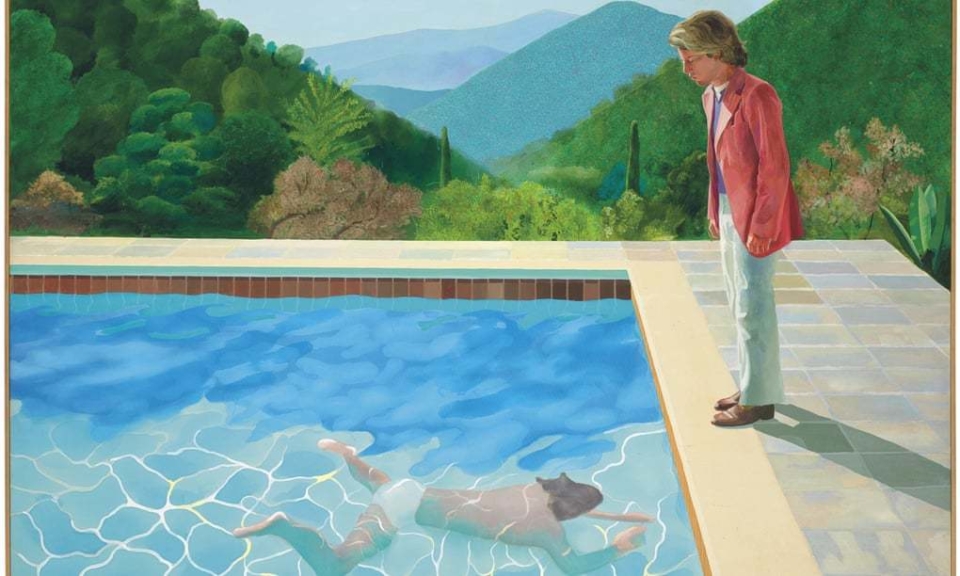 Influential artist David Hockney has just become the most expensive living artist at auction in history. “Portrait of an Artist (Pool with Two Figures)" sold at Christie’s New York showroom auction house on the 15th of November for a world record smashing 90.3 million USD (including buyer’s premium). The previous record was held by artist Jeff Koons and his work “Balloon Dog (Orange),” which sold for $58.4m at Christie’s in 2013

To put this price in context, this auction places the value of David Hockney’s’ defining work at nearly one fifth of the value of the single most expensive piece of art ever sold at auction, Leonardo da Vinci’s ‘Salvator Mundi’, which sold last year for 450.3 million.

The work itself features two of the Hockney’s most celebrated motifs – the swimming pool and the double portrait. Inspired by the juxtaposition of two photographs on his studio floor, the work was abandoned in 1971 before being completed the following year in 1972. With a looming exhibition deadline, Hockney reportedly worked on the 7 by 10 foot piece for 18 hours a day for two solid weeks, and later looked back fondly on the time saying that ‘working with such intensity; it was marvellous doing it, really thrilling.’

Considered one of the most influential British artists of the 20th century, and an important figure in the 1960s Pop Art movement, this auction house record puts Hockney well and truly amongst artists such as Warhol, Pollock, Rothko and Lichtenstein.

The Hockney art market is also continuing to grow, with eight works in 2017 rising to nineteen so far this year, and their overall value climbing. Vice president of post-war and contemporary art at Christie's, Ana Maria Celis defined the artwork by saying "We rarely can say, 'This is the one opportunity to buy the best painting from the artist.’ This is it." While “Portrait of an Artist’ is arguably Hockney’s most famous work, we can likely expect to see Hockney’s artworks rising even further in both value and prestige.