Our 2020 Unearthed Art Prize has certainly unearthed some incredible talent! Checkout our 25 finalists below, and discover some amazing art, ready for your home!

Congratulations to our Art Prize and People's Choice Winners! 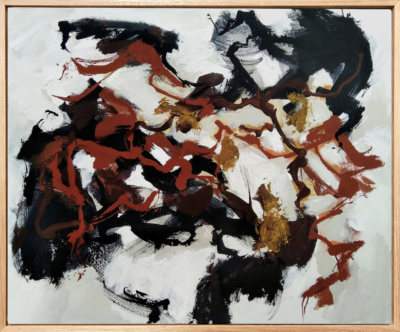 Born in England, Alex migrated to Australia in 1988. Her career in knitwear design encouraged a creativity in colour form and texture, and her art is centred identity and place. She is inspired by her travels and environment, particularly the connected experience and memories.

"Creekbed" follows a walk along a dry Central Australian riverbed, recently blackened by fire. Intense sunlight, desiccated leaf litter and the rustle of air through branches all form part of this piece. 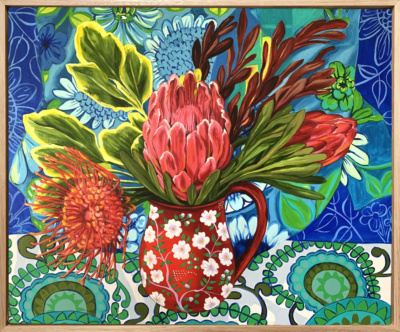 "Retro in Blue and Pollulating Proteas" by Alicia Cornwell
Oil on canvas.

Living in the Dandenong Mountains in Victoria, Alicia has spent time as an art teacher as well as running her own business for Vintage and Antiques for the home - which has supplied props for large scale movies and TV shows including Miss Fisher's Murder Mysteries.

She works at her easel daily, and this piece has been inspired by her collection of vintage fabrics along with her 100 year old garden. 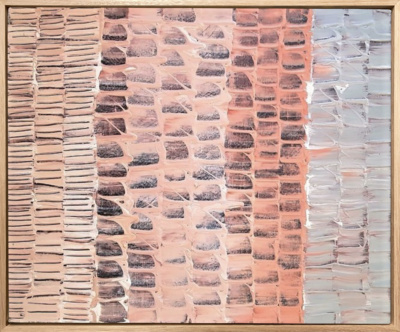 Born in Seoul, Amy moved to Melbourne twenty years ago where she studied Fine Art and Teaching. She is now a part-time kindergarten teacher and part-time painter. Returning to art after having children, Amy found grabbing a brush and canvas to be the perfect way to find herself again.

Painted after a road trip alone to 'fresh up' Amy's mind, "Land-scraped" is an admiration of our land, and its dramatic yet peacefully repetitive landscape. 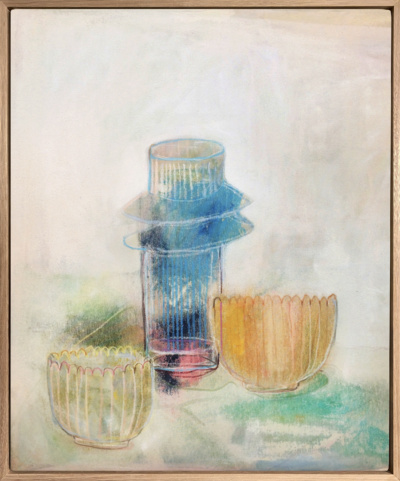 Anja is both a painter and illustrator, and lives in a tiny off-grid home and studio on the south coast of NSW. She loves beautiful objects and plants and has a passion for painting still life.

Her works explore her interest in the transition between abstraction and impressionism, memory and actuality. Motivated by texture and light, Anja uses it to imbue a sense of atmosphere into and character into the objects she paints. 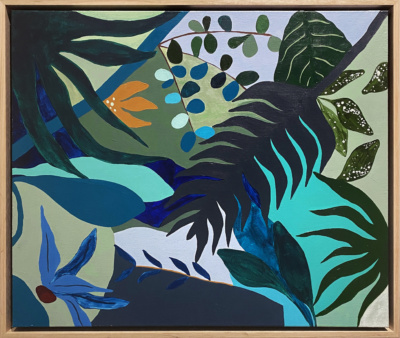 "Her Living Room Grows" by Audrey Kearns
Acrylic and oil on canvas.

In her final year of her Master's Degree at the University of Melbourne, Audrey, now 24, has long studied art, pursuing her work as a self-taught artist since the age of 8.

Audrey is equally interested in exploring colour and shape through abstraction and still lifes. This artwork follows Audrey's continued theme of exploring the connectedness that exists between humanity and the natural world. 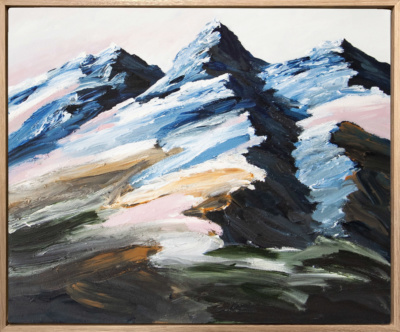 "Well it’s the alps of some sort I guess" by Benjamin Ashton
Acrylic on canvas.

"I don't paint - I curate aesthetics" - or at least that's what Benjamin imagines himself saying when people ask if he's an artist. He loves to paint based off moods and aesthetics curated in his mind, and often doesn't know what the final piece will look like until its finished. While he sees himself as a perfectionist he enjoys the little imperfections that make an artwork unique.

22 year old Benjamin began painting under a year ago when a back injury forced him to take time off work. Inspired by his sister's recent holiday in Europe and the dramatic landscapes there, he intends for the brushstrokes in this work to be calming, but also evoke a memory of adventure. 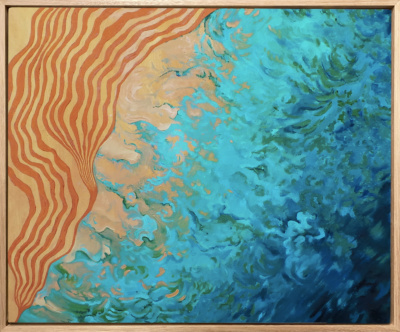 Currently a full time artist working from the City of Melbourne's Creative Spaces 'River Studio' in Footscray, Bridget fell in love with being an artist at a young age, but her dream became a reality only 4 years ago.

Inspired by her memories of living by a quiet bay in New Zealand, Bridget find the sea to be a place of contemplation and reflection. 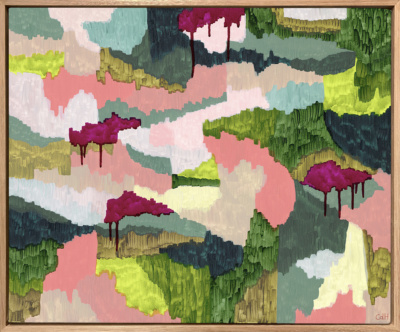 Chris works in his own graphic design business, but creating art has always been a passion he dreamed of pursuing. A few years ago he picked up a paint brush and decided to go for it.

Using bright, bold colour schemes "New Growth" depicts an abstract landscape, inspired by the texture of a tapestry. Chris aims to allow viewers to make their own connections and interpretations of his works through their colours and abstraction. 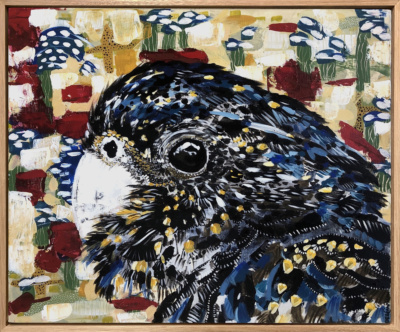 Living just outside of Ballarat, Debbie works with her mother in an Antique store giving a new life to what some might call junk. After her children grew older, she found more time to return to her passion of art, though now she focuses more on painting than drawing.

Debbie is fascinated by the colours and patterning of birds. "Angus" came about to raise awareness on the plight of Glossy Black Cockatoos, a rare species losing habitat and impacted by the recent bushfires. 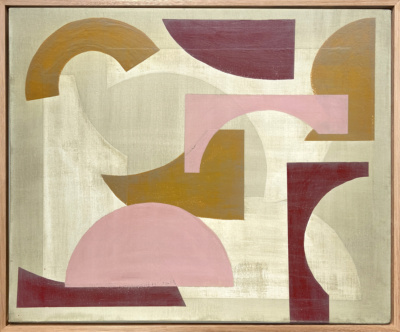 An Adelaide based artist and designer, Denise has worked previously in a varied range of creative fields; from Makeup artistry to photography. The change of pace that came from having a child allowed Denise to contemplate what she really wanted - to return to her roots of art and design.

From Jaipur - India, attending a block printing course, Denise fell in love with the city, particularly the colour, textures and abstract shapes. This work is an interpretation of the images, memories and emotions that she experienced there. 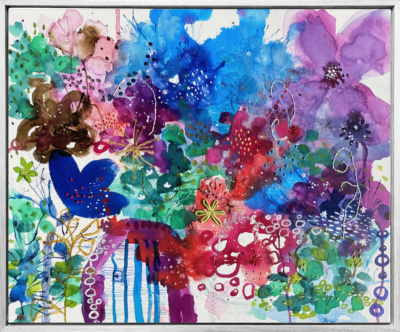 With a love of colour and pattern, Elizabeth finds herself not constricted by medium, and her forms of expression have evolved into unique artworks. She has no formal training but has joined many workshops and classes over the years, learning new techniques and processes.

"Serendipity" evokes engagement in nature. The 'door' shown in the work invites the viewer in to make new discoveries by chance, experiencing a serendipitous moment, each of these possibilities represented in the tactile and textural elements of stitching and sequins. 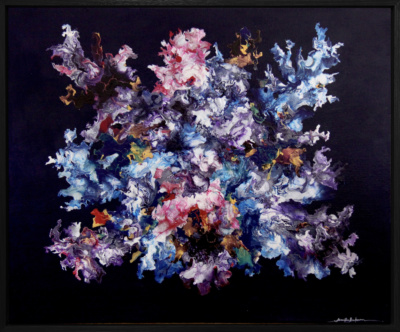 "Awake My Soul" by Grace Foo-Barton
Acrylic, wax and mixed media on canvas

Full of love for the world, meeting new people, and discovering new places, Grace was a kindergarten teacher for seven years and is now a proud stay at home mum who paints full time, either in her kitchen or garage.

After the devastating losses of the recent bushfires, Grace has been inspired by the people's faith, community and unwavering spirit. 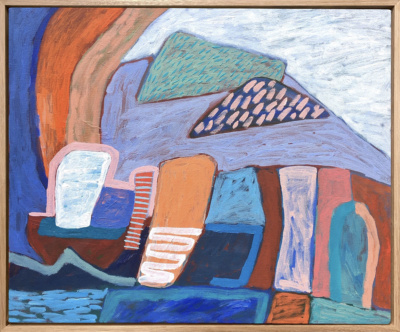 A Newcastle based mixed media artist, Jackie completed a Bachelor of Visual Arts in Auckland before heading oversees to travel and embark on a career in visual merchandising. She has now returned to her art practice full time.

Part of her abstracted aerial landscape series, "Parallel Pontoons" was created from Jackie's experiences near water, particularly beaches, harbours and rivers over the summer holiday period. 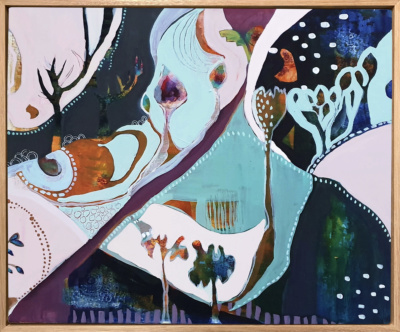 "Breathing in Hopeseeds" by Jac Puntoriero
Acrylic, charcoal and ink on linen canvas

Though completing art in school, Jac has recently returned to painting and in doing so has discovered a quiet and healing space where she can create and tell stories.

Her works are, like life, full of layers, stories and contrasts. This piece represents the moment of taking a step back, a deep breath and discovering connections and clearer paths. Here Hope Tree seeds are planted, and we can realise our own strengths and bravery. 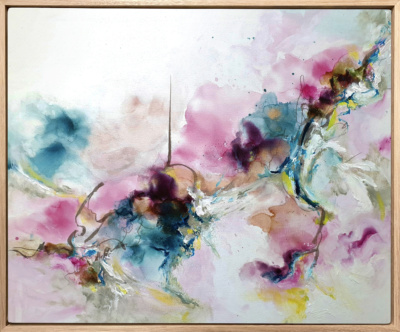 Joy is a Melbourne based artist with a background in Urban Planning. Though she has always loved painting and drawing, she only started painting seriously during her recent maternity leave as a way to express the many emotions she was feeling.

Inspired by photos of regrowth after the recent Bushfires, Joy painted this piece with the aim to give others a sense of light and hope. 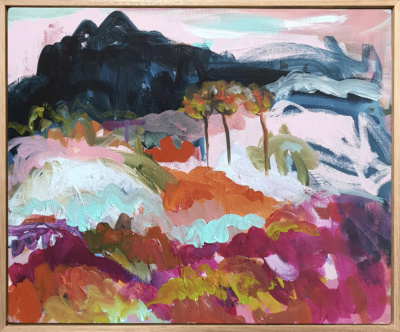 Previously a Visual Arts teacher, Kate now focuses solely on her art practice, gaining a supportive following and selling paintings of all sizes. Kate is also the cofounder of the successful campaign for drought relief; Art for Bales.

The regenerative powers of the Australian landscape, recently ravaged by fires, is the inspiration for this work. 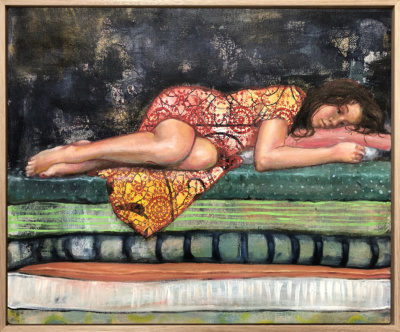 Leah started painting in 2000 when pregnant with her first child - instead of the usual pregnancy cravings, Leah found she had the sudden urge to paint. Her art reflects her experiences as a woman and as a mother, and through her work she explores identity, relationships, and what makes people tick.

Interested in fairy tales and the stories we teach children about gender roles, in this work the princess remains asleep, dreaming big dreams, whilst the prince remains absent. 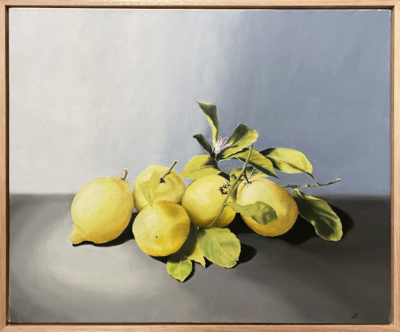 With a joie de vivre, Libby believes in an examined life and value-led living. Falling in love with oil paints, Libby draws excitement from the tradition of still life and the Dutch golden age of painting.

Following this love of tradition and still life, this artwork features old-fashioned, pale and thick skinned lemons, that Libby remembers her grandma growing and squeezing onto crepes during holiday visits. 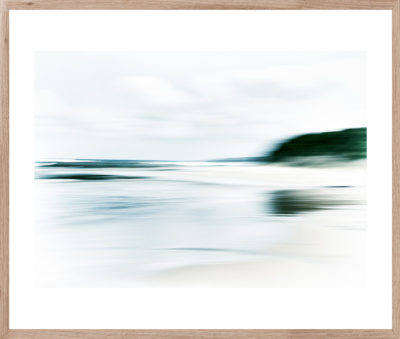 Beginning his photographic practice in film before moving to digital, Mat has recently returned to his roots in Film photography and its intersection with print making. His work is pictorial, and his locations tend to be slow, and carefully considered.

Inspired by the push and pull of the tides, his "Low Tide" series emulate the ocean as seen through squinted eyes in bright light as an ever-changing space. 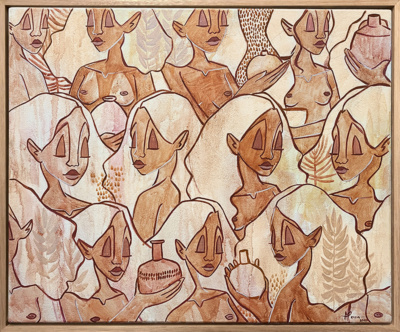 Mia has always been an artistic and creative person. At 17 years old she is also entirely self taught, and with the support of her family has set up an art studio at home as she pursues her career as an artist.

Mia's works have a strong bohemian influence and she enjoys working in several mediums. She finds feminine creatives to be extremely inspiring and hopes to depict an artisan world within her works. 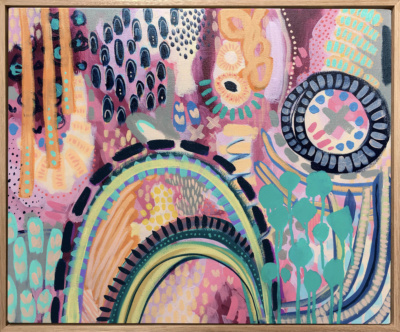 Working in retail, Rachel lives in country Victoria, surrounded by animals and nature. Though she has spent time with animal portraiture in the past, Rachel has recently discovered a passion for colour and abstraction, and loves the freedom of it.

"Soul Shift" focuses on personal change, transitioning between stages of life, and accepting, growing, and evolving. 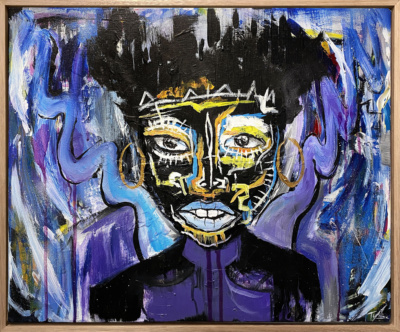 "Leigh-anne" by Tyron Tran
Acrylic and oil sticks on canvas

18 year old Melbourne based artist Tyron Tran's practice spans across painting, drawing, photography and video, while his works are often inspired by dreams, emotional tension and notions of identity as a personal story-telling experience.

This work is an exploration of Tyron's sense of identity and continues growth and development through life. The concepts of masks inspired the layering of paint, exploring the different aspects of a individual as though hidden and revealed behind a solid mask. 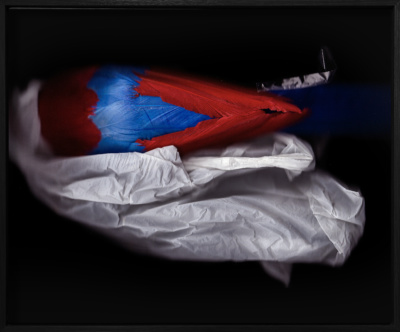 A multidisciplinary artist currently finishing her degree in Fine Arts at RMIT, Susana's work is eclectic and experimental. In particular she explores environmental themes, culture and identity.

This work is part of her "Net Loss" series - a business term repurposed to remind us of the ever increasing consumption and waste of our daily lifestyles, and its impact on our biosphere. 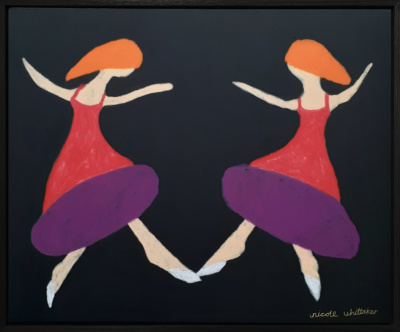 Intrigued by human nature both visually and emotionally, Nicole wants her art to change the way people think of themselves - to see the beauty of the whole rather than focusing on awkward or unwanted parts.

To many people, Ballerina's represent beauty and grace, Nicole chooses to draw them in a non realistic way to show that these qualities exist in all of us, regardless of size, weight or how we see ourselves. 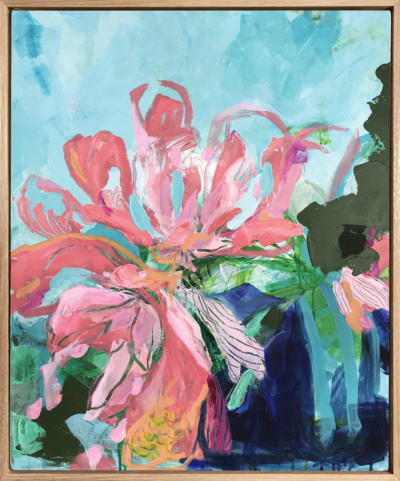 "Rose After Storm 1" by Rachael Little
Acrylic on canvas

Rachael is a happy gardener who loves walking her corgis around the streets, getting inspiration from neighbour's gardens. Rachael has studied Fine Arts and Visual Arts, worked as a ceramicist and spent several years as a florist.

Rachael has always been inspired by florals and foliage. Named after French impressionist, Maurice Utrillo, this Delbard Rose in Rachael's garden was smashed by the wind and rain of a storm, but Rachael found the beauty in its striped and swirling colours and bruised petals anyway.